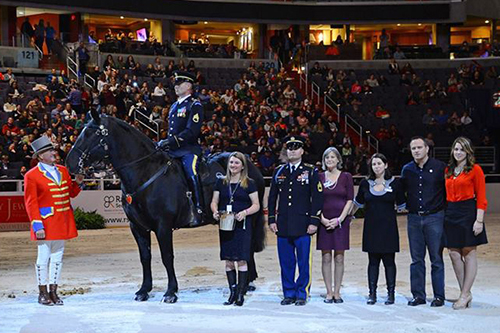 
WIHS Honor and Service Award was created in 2013 to honor Klinger, a special horse who has touched the lives of many in his life of service with the 3rd U.S. Infantry Regiment (The Old Guard) Caisson Platoon. Among his duties, Klinger has served as the official escort to the President of the United States, led the Presidential Inaugural Parade, and acted as a TAPS Ambassador bringing comfort to veterans and families of our fallen heroes.

Klinger was one of the inaugural inductees of the Horse Stars Hall of Fame, a joint program of the EQUUS Foundation and the United States Equestrian Federation CELEBRATING the extraordinary talent of horses and the magical bond between horses and people; HONORING the contributions of amazing horses; SHARING the stories of their athletic and humanitarian feats; and BUILDING a more informed and compassionate America that values the impact of horses in our lives.

Klinger has also been an important part of the Washington International Horse Show for many years – visiting with children on WIHS Kids' Day, joining the Breakfast with the Mounted Police, and participating in the Caisson Platoon Exhibition on WIHS Military Night.