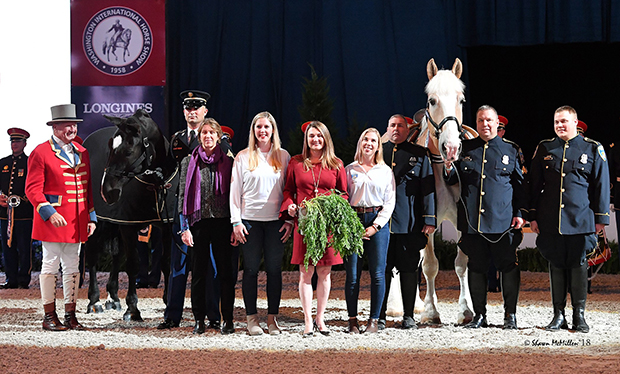 
Big D is a 16-year-old palomino draft cross named in honor of fallen officer Forrest Edward "Dino" Taylor. Sergeant Russel Robar, leader of the Baltimore Police Mounted Unit, and "Dino," have been partnered since 2016, when Robar joined the unit.

Baltimore's mounted police unit has helped keep the city's peace since 1886. As the unit's leader, Sergeant Robar makes sure the unit continues to serve as a positive and efficient force in Maryland while maintaining its recognition as the oldest continually operated unit in the United States. The pair leads the unit in over 170 community and service events each year.

"Dino's our alpha lead horse and a no-nonsense workhorse," Robar said. Dino and most of the unit's horses came from Amish farms and were retired after years of pulling plows and farm wagons. "The children on the Amish farms would be climbing all over them. They're used to people," Robar said. These horses are well suited for the routine patrols of city streets and their crowd control duties. Big D and the seven other equine members of the unit also serve as a model to teach Baltimore youth about the value of public service.

Currently stabled downtown, the unit is scheduled to get a new home. The grant award will be used to help construct an equestrian facility on the property of the B&O Railroad Museum to address the needs of the Baltimore Police Mounted Unit's human and equine officers as well as to create new and strengthen existing partnerships between the Baltimore City Police and the people of Baltimore. The interactive learning site will provide visitors with an immersive educational experience with planned programs, activities, and demonstrations to build positive interaction between the community and Baltimore City Police officers - both two and four-legged.